LAUREL, MD. 09-28-12---The Laurel Park racing office announced this morning that a total of 155 pre-entries (137 horses as 17 were cross-entered, including Steady Warrior who is nominated to three races) were named to the 11 races which comprise the 2012 Jim McKay Maryland Million. The 27th running of the event will take place at Laurel Park next Saturday, Oct. 6. First post is 12:35 p.m.

The post position draw for the $1.05 million day will be held at noon on Wednesday, Oct. 3 in Laurel’s Terrace Dining Room. 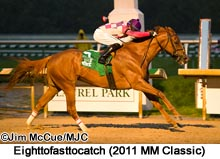 Eighttofasttocatch has five career stakes victories at Laurel Park for trainer Tim Keefe. The son of Not For Love is 1-for-5 during his 6-year-old campaign, which includes a score in the Harrison Johnson Memorial Stakes in March. However he has not hit the board in three starts since, including a ninth place finish in the Pimlico Special (G3) on Preakness weekend and a fifth in the Japan Racing Association last month on the Laurel turf.

“I don’t think we’ll be 4-5 this year,” said Keefe, who has three career Maryland Million victories. “He ran a bad race at Pimlico, had the summer off and didn’t win the Japan Racing Association like last year but he ran very well that day. I was very happy with the effort. I was happy with how he came up to the race, am even happier how he came out of that race and am ecstatic with how he is coming into this race. He is fit, happy, sound, is doing everything right and we get him back on the dirt.” 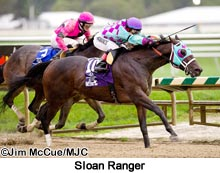 Sloane Ranger edged 2010 Classic winner Regal Solo in last year’s Sprint and will likely face that rival again in 2012. Trained by Marty Ciresa, Sloane Ranger has finished in the money in six of seven starts this year, including a pair of stakes victories. Ciresa indicated Elvis Trujillo will have the mount aboard the son of Parker’s Storm Cat after Horacio Karamanos, who was aboard last year, opted to ride multiple stakes winner Action Andy.

“He is just so consistent,” said Ciresa, who has three Maryland Million wins on his resume. “At 6-furlongs on a fast track he is always there. He has really matured this year and loves to run. I am already looking forward to his 7-year-old year.”

Ben’s Cat is looking to become the fourth horse to win a Maryland Million race three straight years in the Turf Sprint, joining Safely Kept (Distaff, ’89-91), Countus In (Ladies, ’89-91) and Mz. Zill Bear (Ladies, ’93-95). Bred, owned and trained by King Leatherbury, Ben’s Cat has won 17 of 26 starts, including 10 of 15 on the turf. The son of Parker’s Storm Cat had to recover from a broken pelvis before he made his maiden debut at age four, then began his career with eight consecutive victories, which included a 4 ½ length score in the 2010 Turf Sprint. He won last year’s Turf Sprint by a length, one of 12 stakes wins for the 6-year-old. Hebecame Leatherbury’s first millionaire with a repeat victory in the Turf Monster Handicap (G3) at Parx Racing last month.

“It is an incredible story because the kind of horses I breed are not high quality. His sire was an unknown with a $2,500 stud fee and the mare was a homebred,” said Leatherbury, who ranks third on the all-time win list with 6,349 career victories. “Ben’s Cat is really something. In fact, the clocker mentioned to me the other morning he looks as good as ever.”

Leatherbury is tied with Dale Capuano for the top spot in the Maryland Million trainer standings. Both conditioners have saddled nine winners.

Hall of Fame broadcaster Jim McKay originally proposed the concept and remained Chairman of the Board until his death four years ago. Twenty-two times attendance figures have topped 20,000 for the event.

HRTV will have a live presence for the entire card with hosts Dick Jerardi and Jill Byrne on site.