LAUREL, MD. 10-10-13---The Laurel Park racing office announced this afternoon that a total of 118 pre-entries, barring late mail or emails after regular business hours today, were named to the nine stakes races which comprise the 2013 Jim McKay Maryland Million.

Maryland Million officials eliminated two stakes races from the program (Turf Sprint and Oaks), replacing them with a pair of $50,000 maiden races on the turf. In addition, the purses of the Turf and Ladies are increased from $100,000 to $125,000.

There were no pre-entries taken for the maiden races.

The post position draw for the $1 million day will be held at 1 p.m. on Wednesday, Oct. 16 in Laurel’s Terrace Dining Room.

Ben’s Cat is looking to become the first horse to win four Maryland Million races. Last year, the King Leatherbury homebred won the Turf Sprint for the third consecutive year. With that race eliminated, Leatherbury cross-entered his star in the Sprint and Turf, which is now a mile (an eighth of a mile shorter than previous years).  The son of Parker’s Storm Cat, who became Leatherbury’s first millionaire last year, has won 23-of-35 starts for earnings of $1,695,640. Now seven, Ben’s Cat had to recover from a broken pelvis before he made his maiden debut at age four in 2010, then began his career with eight consecutive victories. He has 15 stakes victories on the grass, including three graded wins. 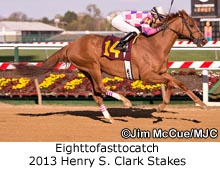 Eleven older horses are nominated to the Classic, including 2011 champion Eighttofasttocatch, who finished fifth a year ago as the betting favorite. The son of Not For Love is 1-for-5 this year during his 7-year-old campaign, which includes a score in the Henry Clark Stakes and a gutsy second in the Pimlico Special (G3) on Preakness weekend. The Tim Keefe trainee has six career stakes victories at Laurel Park.

Hall of Fame broadcaster Jim McKay originally proposed the concept and remained Chairman of the Board until his death five years ago. Twenty-two times attendance figures have topped 20,000 for the event.

The first 4,000 full-paid admissions and Maryland-licensed owners and trainers will each receive a free Maryland Million Sport Cap. On-track entertainment between races will include two pony races,Suttler Clydesdales, Goshen Foxhounds, Great Falls Vaulters and Special Olympics Marylandand a visit from Joey of War Horse fame, brought to life by puppeteers.

HRTV will have a live presence for the entire card with hosts Dick Jerardi and Caton Bredar on site.