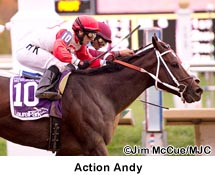 LAUREL, MD. 10-27-12---Robert Gerczak’s Action Andy rallied strongly and just made it to the wire in time in a thrilling finish with Il Villano, winning out by a whisker in a photo finish to take the $350,000 Frank J. DeFrancis Memorial Dash, the feature on the Fall Festival of Racing program.

While making it two straight victories after prevailing in the Maryland Million Sprint Handicap three weeks earlier, Action Andy officially won by a nose under Horacio Karamanos while running six furlongs in 1:10.61.

“I was a little worried at the sixteenth pole, but I know when he kicks he keeps coming,” said winning trainer Carlos Garcia. “He trained better than he ever has coming into this race and Horacio rode him to perfection. That was an extremely nice horse he beat today. They both wanted to win; you could see that. But I guess he wanted it more. This is the biggest win of my career. It’s hard to explain how I feel right now.”

Garcia ranked in the top 10 of the Maryland standings for five straight years in the early 1990’s. This was his 145th stakes victory.

“I’m so happy for Carlos, said Karamanos. “My horse has improved a lot. He is a much better horse since moving back to dirt and was going with more distance. Carlos made a  good decision to switch back to dirt and less distance.”

Longshot Immortal Eyes overcame a stumble at the break and finished third to complete a $1,274.60 trifecta payoff. Action Andy paid $22 to win and topped a $144 exacta.

“He was real comfortable and I wanted him in a good position,” added Karamanos. “The three (Il Villano) was coming inside and we were head to head to the end. I don’t think he ever actually got ahead of us, but it was tight.”

Kendrick Carmouche (jockey, Il Villano-2nd) said, “This horse gave his everything today. He ran his race and tried as hard as he could. I had a great trip and he (Il Villano) had a great trip. We both gave it all we could. We were just a nose short. It was a real shame for the connections. I thought I had enough to win. He ran brilliant race. He fought back gamely and got beat by a nose.”

Travis Dunkelberger (jockey, Immortal Eyes-3rd) said, “I was on the best horse. He fell on his head leaving the gate, which cost him 10 lengths at the start, then got beat by two lengths at the finish.”

Terry Thompson (jockey, Alsvid-4th) said, “He was blowing pretty good after the race. You never want to second guess yourself but the trainer (Chris Hartman) probably wished he could have had a work over the track. This track is much deeper than the one at home (Remington Park). We were right there turning for home but came up a little short.”

Forest Boyce (jockey, Broad Rule-5th) said, “We got a good trip. I can’t make any excuses. The speed just didn’t come back to us.”

Alex Cintron (jockey, Bet the Power-6th) said, “It was a bad post (Bet the Power drew the rail). My horse likes to be in front or clear and we didn’t get it.”

Elvis Trujillo (jockey, Sloane Ranger-7th) said, “He didn’t like the dirt in his face today. He couldn’t keep up turning for home.”

Joe Bravo (jockey, Sean Avery-8th as morning line favorite) said, “This horse trains great and came into this race today in great shape. But he just didn’t fire today. He seemed fine before and after the race. I just don’t know why he didn’t run like he normally does.”

Luis Garcia (jockey, Royal Currier-9th) said, “This horse doesn’t like dirt kicked into his face and unfortunately I could not get him outside. He was just not a happy horse today.”

Angel Serpa (jockey, The Hunk-10th) said, “My horse has lots of speed. He broke good and nobody wanted the lead so I took it early. He just got tired and quit.”

Ramon Dominguez (jockey, Pacific Ocean-11th as the betting favorite) said, “He’s a good horse. We were matching strides with the horses to his outside but he just didn’t have it today.”

A crowd of 5,049 attended the Fall Festival of Racing on a pleasant afternoon in central Maryland. The 11-race program featured 115 runners, including 70 in the six stakes races.

“This is the best card we’ve had at Laurel in the five years I have been here,” Maryland Jockey Club president Tom Chuckas said. “The racing office did a tremendous job of filling the races with quality and quantity.”