LAUREL, MD. 09-13-12---Baltimore Belle returns to the scene of her last two stakes victories when she leads a field of ten registered Maryland-bred fillies and mares across the turf in the $100,000 All Brandy Stakes Saturday at Laurel Park. 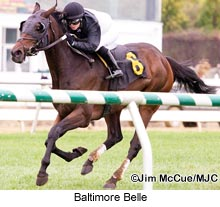 Baltimore Belle (9-5) won both the Lady Baltimore and Geisha Stakes here to end her 2011 campaign. This year she’s started six times for trainer Mike Trombetta, with seconds in the Sleigh Ride Stakes at Parx, the Maryland Racing Media Stakes and Conniver Stakes at Laurel. The daughter of Bowman’s Band comes into the race off back-to-back seventh place finishes in the Windward Stakes at Presque Isle Downs on July 3 and the G3 Gallorette Stakes at Pimlico Race Course on the Preakness undercard.

“She didn’t like the synthetic at Presque Isle and was in a little deep at Pimlico, so we decided to regroup,” Trombetta said. “We are happy with how she is training leading into this spot.”

Trombetta indicated his 5-year-old mare would run next in the Jim McKay Maryland Million Ladies on Saturday, Oct. 6. She was second in that race a year ago.

“This is a very competitive field,” added Trombetta. “We are hoping she can go into the Maryland Million with a little momentum.”

Charged Cotton (4-1) has made four lifetime starts on the grass with two wins and two thirds. This is the first stakes effort for the daughter of Dehere. Horacio Karamanos has the mount for trainer Ignacio Correas.

After three straight victories at Delaware Park this summer, Daydreamin Gracie (9-2) moves out of the claiming ranks. Joshua Navarro keeps the mount for trainer Dane Kobiskie.

Last year, Dream Louise (6-1) finished directly behind Baltimore Belle in both the Maryland Million Ladies and the Lady Baltimore Stakes. However, the daughter of Louis Quatorze has not won since July 16, 2011. Abel Castellano has the call for trainer Edwin Merryman.

Merryman’s sister Ann will start Grant Park (8-1). The Action This Day filly is the last horse to defeat Daydreamin Gracie, doing so on the Delaware grass in mid-July. Geovany Garcia is her rider.

Queen Chatanika (10-1) finished third in the Jameela Stakes last Saturday. Xavier Perez has the mount aboard the Daniel O’Ryan trainee.

Access to Charlie (12-1) has a victory in the 2011 Twixt Stakes on her resume. She’s 1-for-4 on the turf for trainer Larry Murray. Sheldon Russell rides the daughter of Indian Charlie for the first time.