“It is a tough race because they all look the same,” said trainer Dane Kobiskie, who has entered a pair of runners for Saturday’s feature.

Charles Town-based Dance to Bristol is the 5-2 morning line favorite. The daughter of Speightstown broke her maiden and then placed in the Smart Halo Stakes at Laurel before winning the Pandera Stakes at Aqueduct in December. She went back to Aqueduct on January 14th and finished fourth in the Ruthless Stakes. Elias Peltroche keeps the mount for trainer Ollie Figgins.

Defy Gravity (5-1) beat Dance to Bristol in the Smart Halo Stakes then finished third behind that runner in the Pandera Stakes in New York. Lori Testerman has saddled the daughter of Bandini to three wins from seven starts. Xavier Perez rides for the first time.

The speedy Double the Energy (7-2) has never finished out of the money in five career races. The Unbridled Energy offspring reeled off three consecutive victories last fall before finishing second in an allowance test here January 16.  Erick Rodriguez has the riding assignment for trainer John Salzman, Jr.

Dancing Anna (9-2) is a stakes winner at Charles Town and stakes placed at Belmont Park after eight starts for trainer Jerry Robb. Her latest was a surging victory over allowance runners, including Double the Energy three weeks ago. Wesley Ho keeps the mount.

Kobiskie entered the 4-1 entry of Doe and Lady June Bug but said Thursday afternoon he plans to run Lady June Bug, who won a pair of races here last month and had a solid half-mile work in 48.80 seconds at the Bowie Training Center for this spot. Travis Dunkelberger will ride.

“She is improving and worked lights out yesterday,” Kobiskie said. “She will need to step it up to run with this company. I would be pleased to be stakes placed in this spot and expect her to keep improving during the year.”

Pennies Appeal (8-1) got the nod in a thrilling, three-way finish at Laurel last Wednesday. The three-time winner was claimed by trainer Howard Wolfendale in her previous start. Sheldon Russell is her rider.

Terralba (10-1), fourth in her last two stakes attempts at Aqueduct, also finished third behind Defy Gravity and Dance to Bristol in the Smart Halo. Mark Shuman will attempt to improve on those efforts. J.D. Acosta rides. 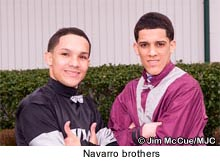 The Navarro brothers made a triumphant return to the Maryland jockey colony this week as both Joshua and Kevin visited the Laurel Park winners’ circle Wednesday, their first day back in the jocks room.

Joshua, who has ranked near the top ten in the local standings since arriving on the scene in August 2009, won Wednesday’s finale aboard first-time starter Firey Rockette. The 20-year-old missed more than two months after injuring his left shoulder in a November 12 spill.

Kevin, who spent the month of January riding at Aqueduct, was victorious two races earlier with Iris’ Proverb for top trainer Dale Capuano. The 18-year-old spent the fall of 2011 in Maryland with 10 winners, including his maiden score here on November 5.

“Maryland has always been good to the bug and we are hoping to take the torch and run with it,” said Kevin’s agent Marty Leonard. “He definitely has potential. The stint in New York was tough on him. He is happy to be back here and is willing to work hard and possibly win the Eclipse Award for outstanding apprentice.”

In other news, veteran Harry Vega has moved his tack to Hawthorne. The 46-year-old, who is 70 wins shy of 4,000 for his career, has been a regular rider in the mid-Atlantic for more than a decade. He had just 10 mounts during the first month of the 2012 Laurel Park winter meeting.