Dominguez Returns To The Scene Of His First Grade 1 Score

Dominguez Returns To The Scene Of His First Grade 1 Score 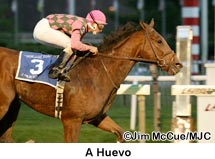 LAUREL, MD. 10-26-12---Before Ramon Dominguez became a two-time Eclipse Award winning jockey, he was the top rider in the mid-Atlantic in search of a Grade 1 victory. Dominguez earned his first in the Frank J. De Francis Memorial Dash aboard A Huevo on November 15, 2003 at Laurel Park.

“I remember it well,” Dominguez said Thursday morning from New York. “The horse was sitting back and then made a run on the outside. I was able to win the race and he won pretty handy (by 1-3/4 lengths). It was extremely exciting for me. Michael Dickinson was the trainer and he was somebody who was putting me on a lot of good horses. I was riding Tapit and Soto for him at the time.”

Dominguez returns to Laurel Saturday with 41Grade 1 victories, according to Equibase. Now New York’s top rider, he will be aboard Pacific Ocean, the 7-2 second choice in the $350,000 De Francis Dash. The De Francis Dash was a Grade 1 race from 1999-2009 but lost its grade when the race was not contested twice during a three-year period from 2008 to 2010. 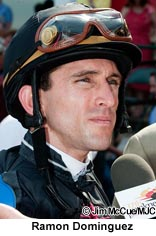 “I started working with (agent) Steve Rushing and that was a key to my success,” added Dominguez. “He had a good relationship with the Maryland horsemen because he had been working with Edgar Prado for so long. It really didn’t take long for us to get going. We are still together. Maryland was definitely my stepping stone and I really have great memories. So many trainers treated me great and any time I go back I can see how everybody is happy to see me and happy to see the success I have had.”

Pacific Ocean has been running in graded company all year, including a win in the James Marvin Stakes (G3) at Saratoga in mid-July. The son of Ghostzapper is trained by Rick Dutrow.

“I actually breezed him before the James Marvin and was really impressed,” said Dominguez. “I’m excited to be on him. He comes from a solid barn who will have him ready to run.”

The 35-year old Dominguez, who ranks 29th on the all-time win list with 4,913 victories, has riding assignments in all six stakes races on the Fall Festival of Racing program.