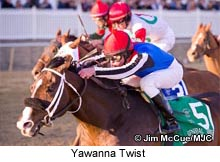 Yawanna Twist, who finished fourth in the 2010 Preakness Stakes (G1), was winning a stakes for the first time for Steel Your Face Stables. Ridden by Mike Luzzi, the son of Yonaguska chased stablemate This Ones for Phil and jockey Ramon Dominguez down the backstretch, moved to the rail and held that position to the top of the stretch, then rallied up the fence to win by a half-length while covering the 7-furlong distance in 1:22.38.

“He’s a little racehorse and you can see his record,” Luzzi said. “He tries every time but we got him great this year. I think he’s probably the best he’s ever been. I committed to the inside down the backside. I know Ramon’s body language and it seemed like he had a lot of horse and that was the one problem. That’s a nice horse of course and Mr. Dutrow is good at that, he likes short rest. When he does it he’s usually dangerous.”

This Ones for Phil finished second. Toby’s Corner, in his first start since winning the Wood Memorial (G1) ten months ago, was third.

The runner-up, who has five stakes wins on his resume, won a $100,000 claimer at Aqueduct Friday and as planned Dutrow wheeled back him back on two days rest. The son of Untuttable sprinted to a clear lead and fought to the end in a big effort.

“He ran great. We were just second best,” Dominguez said. “I was very pleased with the effort. There really wasn’t a ton of speed and my horse is usually sharp out of the gate so when he broke out on top we would be on the lead. Rick is amazing. I wasn’t concerned that he just ran the other day. He was not a tired horse at all. He even galloped out strong.”

This was the second General George score for Dutrow, who also won the 2004 race with Well Fancied.

“He is a real horse trainer-old timer kind of style,” said Luzzi, of Dutrow. “To be in his barn is unbelievable. This horse blew out Friday (3-furlongs in 35.2 seconds). I didn’t want to squeeze the lemons. He is such a good trainer. He knows all his horses, loves all his horses and he really likes this horse.”

Toby’s Corner was considered one of the favorites for last year’s Kentucky Derby (G1) but trainer Graham Motion had to scratch his star the week of the Derby after the colt injured his left hind leg in training. The son of Bellamy Road, who broke his maiden at Laurel Park as a 2-year-old and won an allowance race during the 2011 Laurel winter meeting, stalked the pace and finished  just a length behind the winner.

“He broke very good,” said Eddie Castro, who was aboard Toby’s Corner. “We just sat on the outside behind all the speed. I asked him to pick it up going into the turn. He was gaining on them slowly. He gave a little spurt at the top of the lane and finished with something left, just couldn’t get to the winner.”

Luzzi  was winning the General George for the third time. A Maryland mainstay before relocating to New York, Luzzi won aboard Star Touch (1991) and Esteemed Friend (1999).

“There are a lot of familiar faces,” said Luzzi, who won the Eclipse Award for Outstanding Apprentice in 1989 while riding in Maryland and won two riding titles at Laurel in the early 1990’s. “It is fun. It feels like home. I grew up in Delaware but started the career here. It is good to come back.”