Introduced in 1990, the De Francis Dash is one of the elite six-furlong sprints in the country with four of the 20 winners-Housebuster (1991), Cherokee Run (1994), Smoke Glacken (1997) and Thor’s Echo (2006)-earning Eclipse Award honors for champion sprinter.

Sean Avery (5-2) won the G1 Alfred Vanderbilt Handicap in August 2011 but has run just twice during his 6-year-old campaign. The Allen Iwinski trainee won the Affiliate Stakes at Belmont Park on Sept. 8 then finished fifth in the G1 Vosburgh three weeks later. The son of Cherokee Run has won 5-of-7 since Iwinski took over as his trainer in 2011.

Pacific Ocean (7-2) has been running in graded company all year, including a win in the James Marvin Stakes (G3) at Saratoga in mid-July. The son of Ghostzapper is trained by Rick Dutrow, who captured this race in 2007 with Benny the Bull. Ramon Dominguez, who won his first G1 race in the 2003 De Francis Dash aboard A Huevo, will be aboard the 5-year-old gelding.

Royal Currier (9-2) won the Mr. Prospector and Teddy Drone  Stakes at Monmouth Park in July for trainer Patricia Farro. Then the son of Red Bullet finished third, behind Sean Avery, in the Affiliate Stakes. Luis Garcia, who rode the gelding to a runner-up finish behind Ben’s Cat in the 2011 Laurel Dash, picks up the mount. 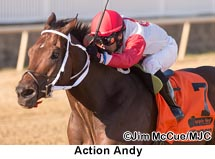 Action Andy (6-1) sped to a gate-to-wire victory in the Jim McKay Maryland Million Sprint at Laurel Park on Oct. 6. Trained by Carols Garcia, the son of Gators N Bears has four stakes victories this year, winning the Pelican and Super Stakes at Tampa Bay Downs last winter and adding the Da Hoss Stakes at Colonial Downs this summer.

“He doesn’t need to be in the lead. He can sit right behind and make one run at it,” Garcia said. “No matter where you run him he does very well. Right now he’s at the top of his game. He’s training superb and came out of the race so good and deserves a chance. It’s a tough race, you have a Grade 1 winner in and the Dutrow horse is nice.” 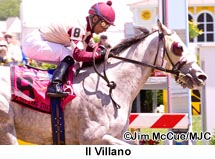 Il Villano (10-1) captured the Chick Lang Stakes in driving fashion on the Preakness undercard in mid-May at Pimlico Race Course. The 3-year-old son of Pollard’s Vision has been out of the money just once in 10 starts, a fourth place finish in the Gallant Bob Stakes last month when he was beaten a head for third. 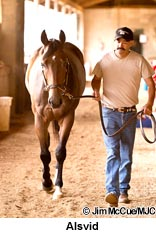 Alsvid (10-1) has four stakes victories this year, while competing at Prairie Meadows (Iowa) and Remington Park (Oklahoma). The 3-year-old son of Officer comes into the race off back-to-back scores at Remington where he earned 97 Beyer Speed figures. The Chris Hartman trainee, who arrived at Laurel on Sunday, is a perfect 4-for-4 at the distance.

“We drew the outside but I think that’s a good box for the horse to draw, actually,” said Hartman, who has never saddled a horse in Maryland. It doesn’t bug me too much. The horse is doing really well and is very effective at that distance, for sure. I don’t like running a 3-year old against older horses but we felt that he’s done that his last two races, he’s stepped up to the plate. We wanted to train him over the track and he’s been getting over it really smooth.”

Sloane Ranger (15-1) finished 1-1/2 lengths behind Immortal Eyes for second in the 2011 De Francis Dash but was third while attempting to defend his Maryland Million Sprint title earlier this month.

Bet The Power (15-1) has crossed the finish line first in his last two races but was disqualified from victory in the Hockessin at Delaware in late July. The son of Albert the Great has finished 1-2 in eight of nine starts as a 4-year-old.

Immortal Eyes (20-1) finished a half-length behind Candyman E in last year’s De Francis Dash for trainer Damon Dilodovico. The 7-year-old son of Greatness comes into the race off a victory in the Jefferson County Commission Handicap at Charles Town last Friday night. Travis Dunkelberger is his regular rider.

“He really came out of this race very well and we feel like he’s peaking,” Dilodovico said. “We considered passing the Charles Town race and going straight to the Dash but that was a race where we felt we were going to be very tough to beat. He was definitely on his game last year. We kind of feel he’s moving towards that right now. He’s training well, we probably could have put him back in training the day after the race at CT. Travis has a world of confidence in him.”

The Hunk (20-1) won a restricted stakes at Monmouth Park in June but has failed to hit the board in his other three starts this year.

Broad Rule (20-1) is winless in seven starts this year but the son of Dixie Union has threewins at Laurel Park during his career.

Here is a capsule of the other stakes races on Saturday’s program. A more detailed advance on the Fall Festival of Racing undercard will be produced Thursday:

Seventeen 2-year-old fillies are entered to race 5-1/2 furlongs in this historic autumn classic, with stakes winners Doubled (Sorority-Monmouth) and Zip Cash Back (Tippett-Colonial) the most accomplished of these juvenile runners.

Previous stakes winners are in abundance as fifteen fillies and mares are entered to go eight-and-a-half furlongs in this wide open affair slated for the turf.

Defending champion Ben’s Cat, who is 5-for-5 on the Laurel lawn, wheels right back off a driving victory in the Maryland Million Turf Sprint. The son of Parker’s Storm Cat has won 18-of-27 starts with 13 stakes scores for earnings of $1,216,090.

Nine challengers are willing to face the King Leatherbury homebred, including millionaire Heros Reward from the Dale Capuano barn. The 10-year-old, who has career earnings of $1,272,898, finished three-quarters of a length behind Ben’s Cat on Maryland Million day. Three-year-old filly Jazzy Idea, who has won a pair of stakes races during the Laurel fall meet, is also entered.

Fourteen runners will start in this 1-1/2 mile marathon on the turf, with recent Laurel Park stakes winners Roadhog and See Tobe likely to vie for favoritism.