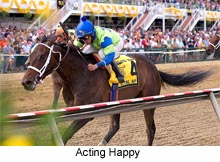 LAUREL, MD. 02-09-12---Graded stakes winner Acting Happy, who has not run in nearly a year, is expected to draw the most attention in Saturday’s $100,000 Maryland Racing Media Stakes at Laurel Park. Five older fillies and mares are entered in the 1-1/8th mile test.

Rick Dutrow won the 2010 Black-Eyed Susan Stakes (G2) with Acting Happy and then raced the Empire Maker mare in three Grade 1 stakes. She finished third in the CCA Oaks and the Alabama at Saratoga before a troubled sixth in the Breeders’ Cup Ladies Classic. Acting Happy raced just once last year, February 16 at Gulfstream Park, during her 4-year-old campaign. Erick Rodriguez gets the mount on the 4-5 morning line favorite.

Lacie Slew (3-1) finished second in the Lady’s Secret at Monmouth and third in the Sightseek Stakes at Saratoga last summer. The Peter Walder trainee ships to Laurel from Florida after making one start at Gulfstream Park this winter. Joe Rocco, Jr., who rode the Mineshaft mare to an eight length victory at Delaware Park last fall, picks up the mount.

Baltimore Belle (4-1) has four Maryland stakes win on her resume -- the Maryland Million Oaks, the Dahlia Stakes, the Lady Baltimore and the Geisha Stakes. Mike Trombetta started training the Bowman’s Band mare in January 2011 and guided her to three of those stakes victories a year ago. The 5-year-old is the only runner in the field to have run at Laurel, with seven 1-2 finishes in 13 tries on her home track. Julian Pimentel will be aboard for the eighth time.

“What I like about her is that she can be anywhere she wants, all I need to do is place her where she is comfortable,” Pimentel said. “She always tries and is an honest filly. I had a chance to go to New York to ride a stakes horse for Chris Grove but I ride a lot for Trombetta and Mike wanted me to stay to ride Baltimore Belle. I don’t know how the favorite is going to perform off the long layoff. It is a short field with some good runners. It should be an interesting race.”

Butch Reid has entered Pilot Point Lady (6-1), a runner who has earned over a quarter million dollars without winning a stakes. Reid claimed the 6-year old mare for $16,000 at Parx Racing in December. Sheldon Russell will ride the daughter of Gold Case.

Queen’s Rule (20-1), a Pennsylvania-bred daughter of Real Quiet, has raced in restricted company in five of her eight starts, with two victories. Jesus Bracho will ride the 4-year-old filly for trainer Sherene Bracho.

Prior to the race, the Maryland Racing Media Association will honor Eighttofasttocatch as the 2011 Maryland-based Horse of the Year. Trained by Tim Keefe at Laurel Park, the son of Not For Love won five of 10 starts as a 5-year-old, including four stakes on his home track. He is expected to make his 2012 debut in the $200,000 General George Handicap (G2) here Monday, February 20.

Four horses and four riders were affected when Abby Kalem broke down while leading the field through the far turn in Thursday’s fifth race.

Leading around the turn, Abby Kalem ducked toward the rail, took a bad step and fell. The horses racing outside of her were able to continue on, but the three trailers, Rainbow Judy, Fast Draw Lady and So Best, who were right in her path, tripped and lost their riders.

All four jockeys, Gerry Bacchas (Abby Kalem), Carlos Lopez (Fast Draw Lady), Abel Castellano (Rainbow Judy) and Forrest Boyce (So Best) were able to quickly get to their feet and were not seriously injured.