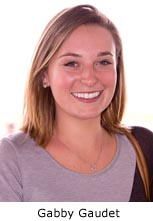 BALTIMORE, 04-03-13---The Maryland Jockey Club today announced that Gabby Gaudet will replace Frank Carulli as the Pimlico Race Course and Laurel Park racing analyst after he leaves the company at the end of the Pimlico spring meeting, which begins tomorrow. Gaudet, who will start full-time after Labor Day, will be co-hosting with Carulli on Saturday and Sunday afternoon’s during the meet. The 22-year-old was chosen after a successful on-air audition at Laurel Park on March 23.

“I was very happy the contest was the week it was because I was on spring break and I had time to prepare,” Gaudet said. “Talking to people my age in the industry, I feel like it is pulling to the younger demographic. A couple of my high school and college friends are starting to follow racing on Twitter and are planning on coming to the Preakness and not just for the concerts in the Infield.”

Gaudet’s role will include handicapping between races, with the selections available on Twitter, writing a blog on the Pimlico, Laurel and Preakness websites and producing news of the day/week package for the simulcast signal.

“Gabby was the most well-rounded candidate with a tremendous upside,” said Maryland Jockey Club president Tom Chuckas. “With the role changing from a pure handicapper to someone who can also assist in the social media world and with the website, her ability to write a blog was significant. She will not have to handle Frank’s morning line duties.”

Equibase chart caller Keith Feustle, who has co-hosted the “Today At The Races” pre-race show on the Maryland simulcast signal with track announcer Dave Rodman since the fall 2011, will take over Carulli’s morning line duties beginning with the Laurel fall meet in September. Feustle has been the oddsmaker at Colonial Downs since 2003.

Gaudet, the daughter of longtime conditioners Eddie and Linda Gaudet, is finishing her final semester at Towson University. She will graduate next month with a double major in mass communication and graphic design.

“My mom was very excited and my dad actually got teary-eyed,” added Gaudet. “My mom home schooled me in trailer at Bowie Training Center for a couple of years before I decided to go back to school in 8th grade, so literally I grew up on the racetrack.”

The St. Mary’s High School graduate wrote for The Saratoga Special newspaper last summer and has been a frequent contributor on Maryland Horse Radio, which airs on CBS Sports Radio (AM 1300) in Baltimore each Tuesday at 6 p.m.

“I am really excited about the opportunity,” Gaudet said. “Frank is a really good handicapper. One of the things I need to focus on is studying the charts and (Daily Racing Form) Formulator. I am going to enjoy the blogging aspect of the job. Not only from a handicapping aspect but also if we have a rider who has a big week. It will be interesting to get to know them better and not from a stat-stand point because that is something that will likely be handled in a press release.”

The 51-year-old Carulli, who has been with the Maryland Jockey Club since January 2002, will be relocating to Las Vegas in July.

“Frank Carulli is one of the top handicappers and morning line makers in the business and he will be missed,” added Chuckas. “He was also extremely helpful during this process with all the candidates and will tutor Gabby during the Pimlico meet. We want to give her as much preparation as possible before she takes over in the fall.”

“The numbers have been strong since last year’s spring meet at Pimlico and we look to continue that trend during the next two months,” Chuckas said. “Turf racing will begin this weekend and the increased purses have brought both quality and quantity to racing product.”