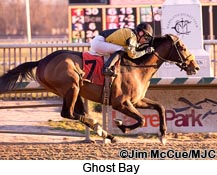 Soon after the start, Ghost Bay was shuffled to last in the field of eleven 2-year olds. Jockey Forest Boyce opted to save ground with the son of Ghostzapper, then angled him off the rail as the field raced around the far turn. At the top of the stretch, they angled back in and were lucky enough to find a gaping hole in the wall of horses that had stacked up in front of them. Ghost Bay charged through and reached the finish line in 1:24.73 for the seven furlong distance, 4-1/2 lengths the better of late rallying Gin Fuzz, with Sunrise Sunset taking third.

Ghost Bay had been winless in two starts entering the Juvenile Futurity after finishing third in two maiden tries at Laurel this fall. Boyce, who had moved her tack to Fair Grounds for the winter, returned to Maryland this afternoon to keep the mount on the Larry Murray trainee.

“I’m so happy Mr. Murray gave me the opportunity to ride this horse again,” said Boyce. “I really didn’t want to lose this mount. The way he ran today, he’s so professional. When I asked him to go for it he never hesitated. He will do anything you ask of him. He reminds me of some of the really good horses I’ve been on in my career with his professionalism.”

“This is the one I thought he had in him,” said Murray.  “I told Forest all along, this is a nice horse. I thought he might be a little closer to the pace today, but with the early fractions being what they were, I now know why he came from the back. Forest rode him great. It was a great, ground saving trip to the top of the lane but then I wasn’t sure where he was going to go. All of a sudden, there were nine horses across the track. When room opened up, he went through there like a good horse. We’ll make sure he comes back okay and I’m not going to get in a hurry with him. I think he’ll be all right going two turns.”

END OF YEAR TITLEHOLDERS HAVE BEEN DECIDED

Kieron Magee wrapped up top honors among trainers in Maryland this year when he won today’s second race with Lady Vivien. He has saddled 54 winners in 2014. Claudio Gonzalez added two winners to his total this afternoon but remains in second with 52. Mike Trombetta is third with 49. All three have starters on New Year’s Eve. Magee and Gonzalez have one each, while Trombetta has four runners entered in three races.

Trevor McCarthy, who was sidelined with a wrist injury last week, wrapped up the fall rider’s title before he went on the shelf. The 20-year old was leading rider at the major Maryland tracks this year, winning the Laurel winter, Pimlico spring and Laurel fall meetings.