Hammond Hoping To Follow In The Footsteps Of Mentors

Hammond Hoping To Follow In The Footsteps Of Mentors

LAUREL, MD. 10-13-12---Scott Hammond moved to the United States nearly 20 years ago in search of the American Dream. He moved one step closer by saddling his first winner in the state of Maryland when Belgian Beer rallied to win Monday’s third race at 13-1 odds.

“It was great, he is an honest horse and runs hard every time,” Hammond said. “It was a shame the first one could not happen here. I want to be successful in Maryland.”

Belgian Beer is 2-of-5 since Hammond claimed the 5-year-old son of Bowman’s Band at Pimlico Race Course in May. Hammond’s first career winner occurred at Delaware Park in mid-June.

“I have been fortunate to be around some great mentors,” added Hammond. “Graham is very laid back and a great guy to have on your resume. Not everybody can say they worked for a Kentucky Derby and Breeders’ Cup winning trainer. Tim, his wife Jillian and the kids are like family. He has been really good to me and I have had the chance to work with some pretty nice horses in his barn.”

The Tullock stable has featured stakes winners Sensibly Chic, Yankee Wildcat, Gattopardo and Abbondanza, who competed in the Breeders’ Cup Sprint at Lone Star Park in 2004.

“That was an experience I’ll never forget, being on the track with so many nice horses at the same time,” Hammond said. “It was a tremendous atmosphere and I hope to have a chance to experience something like that again.”

Hammond claimed Mandatum on Sept. 26. The 6-year-old, who has 11 victories since January 2010, will make his first start for his new barn in Thursday’s fourth race.

“I would like to be consistent at winning races to keep the owners happy. It is easier to get going here than home but at the same time it is very difficult to win here at the claiming level with Hugh McMahon, Dane Kobiskie and Jamie Ness,” Hammond said. “We are looking to buy horses from England, using contacts over there with the hopes of getting to a higher level with better horses.” 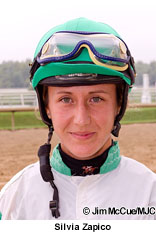 Apprentice rider Silvia Zapico broke five ribs and her right ankle in a Friday afternoon spill at Laurel Park, according to her agent Kevin Witte. The 27-year-old was injured when her mount, Smart N Smokin, ran into the rail, dumped the rider and then kicked her in the ribs.

Zapico rode as an amateur in Europe before turning professional in August. She won four races at Finger Lakes then relocated to Maryland during the Timonium State Fair meet. She is 3-of-55 at the current Laurel Park fall stand.

Witte indicated there is no timetable for her return.

RUSSELL MOVES AHEAD OF CASTELLANO IN RIDER STANDINGS

With a riding triple Saturday afternoon, Sheldon Russell moved ahead of Abel Castellano in the jockey standings after six weeks of the Laurel Park fall meet.