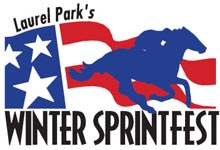 The storied $200,000 Fritchie kicks off holiday racing this weekend at Laurel Park. The John B. Campbell Handicap is the co-feature on Saturday with the $200,000 General George Handicap (G2) headlining Monday’s President’s day card.

The 58th edition of the Fritchie has attracted nine fillies and mares, who will race seven furlongs.

Nicole H has been tabbed the 6-5 morning line favorite by Maryland Jockey Club handicapper Frank Carulli. The daughter of Mr. Greeley has finished first or second in eight of her last nine races, including five stakes victories. Nicole H, who won the Grade 2 Distaff Handicap at Aqueduct last April, was victorious in the Correction Stakes on February 4.

Ramon Dominguez, who rode Harissa to victory last year, has the mount on Nicole H for the seventh time. The two have teamed up for five victories.

Saturday will be a homecoming for the 35-year-old rider who called Maryland home from 2000-04 when he won 1,012 races at Laurel Park and Pimlico Race Course. Dominguez relocated to New York in 2009 after dominating the Delaware Park colony in the mid-2000’s and was named Eclipse Award winner for outstanding rider the last two years.

Lovely Lil (6-1) won three of five races in 2011, including the Grade 2 Go for Wand Handicap in late November. The daughter of Tiznow finished second in her 5-year-old debut in the We’ll Sea Ya Stakes at Aqueduct on January 13. Julian Pimentel will ride.

“She is certainly a hard-knocker,” added Hushion. “I am not sure what happened in her last race. I thought she’d run better than that. Maybe the two turns bothered her but the one turn seven-eighths distance is going to be right up her alley.”

Rick Dutrow, who won the 2005 and 2007 Fritchie’s with Cativa and Oprah Winney, will ship C C’s Pal (7-2) down to central Maryland from his Aqueduct base. The daughter of Alex’s Pal has won three of four since arriving in Dutrow’s barn, including the Ladies Handicap at the Big A on New Year’s day. Junior Alvarado will ride the 5-year-old mare. 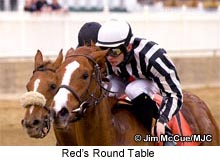 Red’s Round Table (5-1) improved to eight-of-10 lifetime and four-of-five at Laurel with a powerful allowance score on January 21. The 4 year-old daughter of Cuvee cracked an ankle after winning the Wide Country Stakes here last March but has won two of three since returning. Sheldon Russell has the riding assignment on trainer Tim Keefe’s star.

“She has done everything we have asked,” Keefe said. “She is doing fantastic and likes this track. My only concern is the distance but the way she handled herself in the last race another eighth of a mile will not be an issue. Certainly we want to win but if I can get at least a graded place under her belt it would mean a world of good to her as a broodmare.”

Aquitania (6-1) reeled off four straight wins at Laurel during the 2011 fall meeting, including one over Red’s Round Table and 2011 Fritchie runner-up Aspenglow on December 1, then finished third behind Nicole H in the Interborough Stakes on New Year’s Day. Pimentel is named to ride the daughter of Leroidesanimaux for trainer Hamilton Smith.

“She ran a good race up in New York,” Smith said. “She is a honest filly. I tried her long and on the grass but she seems to like sprinting. It is a tough race but she likes Laurel and we’ll see if she can handle better company.”

Magical Feeling (10-1) has won 10 of her last 13 starts for trainer Allen Iwinski but was a distant third behind Red’s Round Table here last month. Regular rider Roberto Alvarado will accompany the daughter of Empire Maker from Parx Racing.

Gary Capuano finished second in last year’s Fritchie with Aspenglow. This year he’ll saddle multiple stakes winner Silver Heart (15-1), who has finished on the board in 22 of 29 lifetime starts. The 7-year-old daughter of Lion Hearted won the 2010 Maryland Million Distaff Starter Handicap. Travis Dunkelberger, who won the 2001 Fritchie with Prized Stamp for Gary’s brother Dale, has the mount.

Heart Butte, who won a pair of stakes races a year ago, is the 2-1 morning line choice to win the $100,000 John B. Campbell Handicap, the co-feature at Laurel Park. The $200,000 Barbara Fritchie Handicap (Grade 2) headlines the nine-race card.

Heart Butte, from the powerful Todd Pletcher barn, won the Evening Attire Stakes last January and then returned after an 11-month hiatus, returned to win the Auld Lang Syne Stakes at Parx Racing on New Year’s Eve. In his 5-year-old debut he finished fourth while trying to defend his Evening Attire title three weeks ago. Ramon Dominguez will ride the son of Empire Maker.

“He always shows up and should move forward in his third start off the layoff,” Pletcher said.

Five older males will look to upset Heart Butte, who drew the outside post.

Jimanator (3-1) finished third in both the Evening Attire and Auld Lang Syne after a score in the Fred Hopper Stakes (G3) in November. Trainer Mike Trombetta claimed the son of Broken Vow last summer at Saratoga. Junior Alvarado has the mount.

Indian Dance (7-2) has not reached the winners’ circle since winning the 2010 Harrison Johnson Stakes here 23 months ago. The 6-year-old was second to Eighttofasttocatch in the Jennings Handicap here last December. Julian Pimentel rides for trainer Larry Murray. 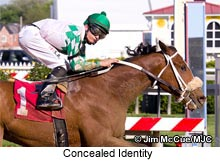 Concealed Identity (6-1) won a pair of stakes races during his 3-year-old campaign last year and competed in both the Preakness Stakes (G1) and Haskell Invitational (G1). Sheldon Russell has the mount for trainer Linda Gaudet.

“The plan was not to run him until the Harrison Johnson at the end of next month but he has been a bear in the barn,” Gaudet said. “He could be a little short but it is a short field, it is home and he is doing great.”

Thunder Lord (6-1) won a pair of races at Laurel last fall before a second place finish behind Heart Butte in the Auld Lang Syne. Victor Santiago will be aboard the El Prado gelding for trainer Jose Corrales.

Houston Bull (10-1) has won of three of four and makes his stakes debut for trainer Gary Capuano. Abel Castellanois named to ride. 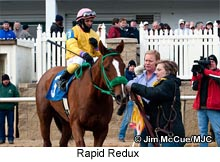 The Maryland Jockey Club will honor the connections of Rapid Redux on Saturday. Rapid Redux has won 22 consecutive races, including six at Laurel Park. The son of Pleasantly Perfect had a perfect 19-for-19 season in 2011 and took home a pair of national awards.

The celebration will include a poster giveaway, a winners’ circle presentation with the 6-year-old gelding in attendance after the third race (approximately 1:45) and an autograph session with owner Robert Cole and trainer David Wells at the grandstand crossover, beginning at 2 o’clock.

“We were able to run seven times in Maryland during the streak, including Timonium, and it is good it worked out that way because I am a Maryland guy,” said Cole, a 1981 graduate of Loch Raven High School in Baltimore County. “When the country was watching as we closed in on the record he was running here. Even though he trains at Penn National I think people think of him as a Maryland horse. David and I feel that way, too.”

Saturday will feature over $2,500 in prize giveaways and a complimentary knit beanie cap to the first 3,000 paid fans. Those who wear the cap to Laurel on Monday afternoon will receive free admission and will be entered into a drawing to win Preakness tickets.