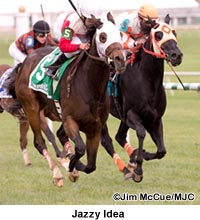 LAUREL, MD. 10-27-12---Edwin W. Merryman’s Jazzy Idea, the only filly in the field, broke her own course record over six furlongs on the turf to capture the $150,000 Laurel Dash for three-year-olds and up by ¾ of a length over defending champion Ben’s Cat.

Ridden by Elvis Trujillo, Jazzy Idea bested eight males while running the distance in 1:07.29 to beat the mark of 1:07.45 she established on the meet’s opening day while winning the Jameela Stakes.

“I’m speechless,” said Merryman, who also trains the filly. “Maybe I should have run her next week (Breeders’ Cup Fillies Turf). Her style of just sitting off the pace suited this race perfect today. I left it up to Elvis to go whenever he wanted. She’s 3-for-3 on Laurel turf now and before today Ben’s Cat was 5-for-5. She is far and above the best horse I have ever had my hands on.”

Ridden confidently, Jazzy Idea began moving with five-sixteenths remaining, gathered clear sailing for the stretch and closed with a rush to seize the lead and win going away. Night Officer closed to be third, two lengths behind Ben’s Cat.

The second choice, Jazzy Idea paid $6.80 to win and set up a $21 exacta payoff. Three weeks ago, the daughter of Great Notion won the Maryland Million Oaks on the main track. She is now 6-for-8 lifetime while sprinting on grass and has never been worse than second.

“The last two races she showed a lot of speed,” said Trujillo. “Today we had a good trip. We turned for home and had a clear track. She finished good. She’s a real nice filly that tries so hard every time.”

“He ran his race,” said Ben Cat’s owner and trainer King Leatherbury. “He got a great trip and ran the best he could. It figures a closer would win it and she established a new track record and beat me. She is a 3-year-old filly super horse.”

Merryman said his star could make her final start of the season in the Safely Kept Stakes here on Nov. 17.