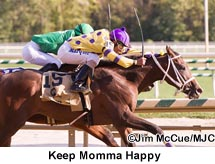 LAUREL, MD. 10-06-12---First time starter Keep Momma Happy was the last one onto the scene, rolling down the middle of the track to post an upset victory in the $100,000 Jim McKay Maryland Million Nursery.

Making his debut for trainer Benny Feliciano with Carlos Marquez Jr. in the saddle, the Scipion colt paid $48.60 as he upended thirteen other 2-year-olds in the six furlong test. His winning time was 1:12.74 and he won by a neck over Alpha Mike Foxtrot, with Lunar Rock third.

“I worked him quite a few times and he was impressive,” said Marquez. “There were some in here with just one win so I knew we could go with them. The outside post actually helped us. He didn’t get dirt in his face he raced well and everybody went to the inside. I had three or four beaten at the eighth pole but when I asked him he went nicely. He has a very bright future.”

The son of Scipion was on the also-eligible list and only drew into the race when trainer John Servis scratched Seventeenohsix Saturday morning.

“This is a real surprise,” said Feliciano, who has five Maryland Million wins on his resume. “I haven’t had the best of luck lately and I thought when he was dropping back going into the turn I had made another bad decision. Up until 11 a.m. this morning I was told this horse would definitely be scratched and not draw in off the AE. I got the phone call on my way home that John Servis had scratched one of his two entries and I was in. I immediately went back to the barn and went into race preparations. Carlos has worked this horse for me twice and both times came back very excited about this colt’s talent. We couldn’t get into a maiden race in the last two weeks and he convinced me to enter in this race and take a chance. I’m glad I listened to his advice. This colt’s always had a lot of talent but he ran very professional out there today and beat some pretty decent horses.”

The winner is owned by Edmund Baxter and bred in Maryland by David Baxter.