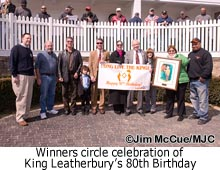 LAUREL, MD. 03-23-13---The Maryland Jockey Club celebrated the birthday of legendary trainer King Leatherbury, who turns 80 on Tuesday, March 26 with a presentation in the winners’ circle after the third race. All fans attending Laurel Saturday received a complimentary button and free birthday cupcakes.

“It is a little embarrassing but I appreciate the tribute,” Leatherbury said.

“I got started because my father had horses, a breeder and owner and I just enjoyed betting on them, really, so I decided to get in the game,” added Leatherbury, who saddled his first winner in 1959 at Sunshine Park. “I have never really considered this work. I enjoy it, which has probably made the difference.”

“I really enjoyed the days of the Big Four,” added Leatherbury. “It was fun trying to compete with them and it made us all better trainers.”

Though he currently ranks fourth on the all-time win list with 6,373 career winners, Leatherbury is not a member of the Racing Hall of Fame.

“I think King was the easiest person to ride for, especially of the big trainers. He was always so calm and collected-never really got over excited. I don’t ever remember him in a bad mood which is unusual because I know he likes to gamble a bit,” said Hall of Fame rider Chris McCarron, who rode for Leatherbury in the mid- 1970’s. “I think the individuals involved in placing the names on the Hall of Fame nomination ballot need to wake up and examine his record They don’t even have to dig deep on how incredibly successful this man has been.”

The Maryland native is currently battling Mike Trombetta and Juan Vazquez for second place in the Laurel Park winter meet standings, behind Hugh McMahon, with one week remaining in the stand.

Leatherbury indicated Ben’s Cat will make his 2013 debut at Pimlico on April 6 in the Mister Diz Stakes. The son of Parker’s Storm cat will be looking for his fourth consecutive victory in the Mister Diz.