Washington, DC (Dec. 20, 2011) –  The Maryland Jockey Club (MJC) and the American Horse Council (AHC) hosted a private advance screening of DreamWorks Pictures’ highly anticipated movie “War Horse,” directed by Steven Spielberg in Washington, D.C. on Thursday December 15 at The Historic Lincoln Theatre.  The evening recognized the Wounded Warriors, A Home for Every Horse, and the Maryland Fund for Horses.  To learn more about these charities and to support their efforts, please visit https://www.marylandracing.com/WHDetails.

Attendance was high for this special evening, and included members of the horse community who came together in a show of support for these worthwhile organizations, and to see the much anticipated film, recently nominated for (2) Golden Globe awards.

“We are pleased that we are able to recognize the many men and women who have served our country, as well as shed light on programs that help find homes for horses,” said AHC President Jay Hickey.  “This movie demonstrates how important horses have been historically in our society and it reflects the special bond that humans and horses can have,” added Hickey. 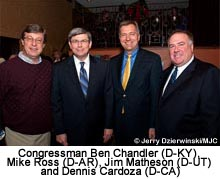 The evening kicked off with a VIP Reception at the legendary Ben’s Chili Bowl, where guests enjoyed signature chili and more from the famous Restaurant. A brief program preceded the film screening which began with an introduction from MJC President Tom Chuckas and AHC President Jay Hickey.  Mr. Hickey then introduced Congressman Dennis Cardoza (CA), who provided an important overview of the equine industry’s significant and important impact on the nation’s economy, as well as a summary of the history of horses in World War I, which provides the historical backdrop for War Horse.

MJC President Tom Chuckas commented on the evening, “We were privileged and honored to co-host such a fun and entertaining event with the AHC. The film was spectacular; the audience laughed, cried and gave the entire picture a resounding “thumbs up”. We remain most appreciative of the support and generosity of our guests and sponsors, and of course, DreamWorks pictures, in making this night possible.”

Before the film was introduced, the Maryland Horse Industry Board (MHIB) presented its December Touch of Class Award to Tiffany McClure, the International Professional Rodeo Association’s 2010 World Champion Barrel Racer.  Tiffany, who grew up in Maryland’s Prince George’s County and graduated from Anne Arundel Community College, was presented with the award by Mr. Hance, MHIB Chair Jim Steele, Ms. Valis and Congressman Cardoza.

The MHIB’s established the Touch of Class Award in September 2011 to honor a Maryland horse, individual, team, organization or event that demonstrates the highest standard of excellence in the Maryland horse industry.  The award is named after Touch of Class, a Maryland-bred mare who won two Olympic show jumping gold medals and currently holds the Olympic record for number of clean jumping rounds in an Olympic competition. Touch of Class is enshrined in the U.S. Show Jumping Hall of Fame.

Past Touch of Class winners include:

•  October 2011 - Colleen Rutledge and her horse Shiraz who were the third highest-placed U.S. horse and rider combination at the prestigious Land Rover Burghley Horse Trials in England and are under consideration for a berth on the 2012 U.S. Olympic 3-Day Team; and

•  November 2011 - John Crandell III and his horse Heraldic who won two silver medals in Endurance Riding at the 2011 Pan American Games held in Chile. Heraldic is the only horse in history to win the triple crown of endurance racing.

For more information about the Maryland Horse Industry Board, visit: www.mda.state.md.us/horseboard.

The AHC is proud to be the association that represents all segments of our nation's diverse horse industry. The American Horse Council works daily to represent your equine interests and opportunities.  More information can be found about the AHC online by visiting www.horsecouncil.org

DreamWorks Pictures’ “War Horse,” director Steven Spielberg’s epic adventure, is a tale of loyalty, hope and tenacity set against a sweeping canvas of rural England and Europe during the First World War. “War Horse” begins with the remarkable friendship between a horse named Joey and a young man called Albert, who tames and trains him. When they are forcefully parted, the film follows the extraordinary journey of the horse as he moves through the war, changing and inspiring the lives of all those he meets—British cavalry, German soldiers, and a French farmer and his granddaughter—before the story reaches its emotional climax in the heart of No Man’s Land.  “War Horse” will be released in theaters on December 25, 2011.