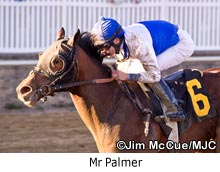 LAUREL, MD. 03-09-12---Michael Lauffer & Gregory McDonald’s Mr Palmer had all the worst of it and still won the $150,000 Private Terms Stakes going away this afternoon at Laurel Park.

After hopping at the start and breaking last, Mr Palmer settled behind eight other three-year olds under Junior Alvarado and stayed there through the first turn.  Alvarado began to urge his mount entering the backstretch and really got to work on the son of Pulpit approaching the far turn, taking him eight wide into the stretch before reaching Where’s Dominic and Battier just past the eighth pole. He roared by them and galloped away, crossing the finish line in 1:51.35 for the nine furlong distance.

“He broke a step slow but I wasn’t worried. The race was just starting,” Alvarado said. “There were a lot of horses on the inside so I tried to kick on with him and when I asked him to run he definitely took off. I really love the way he runs, he’s so professional.”

Hall of Famer Bill Mott trains Mr Palmer, who had left the maiden ranks at Aqueduct in his previous start.

“Maryland racing has been awful good to us,” said Lauffer, who co-owned 2011 Preakness Stakes (G1) winner Shackleford. “You gotta get excited about these three-year-old colts this time of year. We’re going to try to put this horse on the Derby and Preakness trail if he’s good enough. He’s a horse that’s getting better every race. He finally woke up. Now he’s won two in a row. He loves the distance. He’s just a horse with a lot of heart that gives you everything he’s got.”

The Pulpit coltfinished 3-1/2 lengths in front of Battier, with Seventeenohsix taking third and paid $5.60 as the betting favorite.

Bullet Catcher, who made local and national headlines earlier this year after escaping from the Laurel Park backside and taking a 1.6 mile journey, ran a gusty second in Saturday’s 9th race, a $40,000 allowance.

On January 11, the Jerry Robb trainee tossed jockey Jeremy Rose while heading back to the barn after a half-mile work and got loose. He made his way out of the stable gate, made a left on Whiskey Bottom Road and another left onto U.S. Route 1 before being caught, un-injured.  Jockey Abel Castellano captured part of the journey on his mobile phone, which enabled the story to go viral.

“I thought we had it turning from home,” Castellano said. “He really relaxed today. When you look at his past performances, he ran great coming from way back when he won at Pimlico with Mario Pino (May 12, 2011). I didn’t want to be way back and we benefitted from a fast pace. When I asked he took aim and tried hard but the other horse went by us. I was glad to get the mount. After his last race I asked for a chance and they did. He ran well and hopefully when he runs again I can ride.”

Rocky Gap ($19.20) won the 5-1/2 furlong race by a neck for trainer Tim Tullock under Forest Boyce. Bullet Catcher is now 1-of-10 lifetime with seven in the money finishes.

The race was marred by the breakdown of Itzmin at the top of the stretch. Jockey Wesley Ho appeared to suffer a fractured left arm. The horse was humanely euthanized.

Dogwoods Barto fell over the fallen horse and tossed jockey Alex Cintron. Cintron was transferred to Prince George’s Hospital after complaining of neck, back and shoulder injuries. Dogwoods Barto was able to get up and appeared un-injured.

AND DOWN THE STRETCH THEY COME…

With three weeks remaining in the Laurel winter meet, apprentice riders Yomar Ortiz and Trevor McCarthy continue to battle for the top spot in the jockey standings.

Both riders had won a pair of races Saturday. Ortiz holds a three-win advantage over McCarthy, 44-41. Sheldon Russell (31), Jeremy Rose (25) and Abel Castellano (19) round out the top five.

Hugh McMahon is running away with the training title, with 26 victories from 78 starts, a 33.3% winning percentage. King Leatherbury (13), Mike Trombetta (13) and Juan Vazquez (12) are battling for second place.