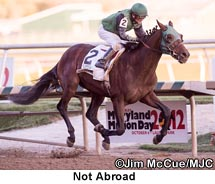 LAUREL, MD. 10-06-12---Jockey Nick Petro and his mount Not Abroad saw an inviting opening along the rail as they circled the far turn. They galloped through the gaping hole, came out the clear leader and drew off to win the $150,000 Jim McKay Maryland Million Classic at Laurel Park.

The Maryland Million is the most important racing day at Laurel Park with 11 races for runners sired by Maryland-based stallions for combined purses totaling $1.05 million. The 27th annual event drew a crowd of 18,420 on Saturday afternoon.

Trained by Petro’s brother Michael, Not Abroad is owned by Tim Cunningham and is a son of the Maryland stallion Not For Love. Regal Warrior, who led from the start, held for second while Tujoes rallied to finish third. The also-rans were Cactus Charlie (4th), defending champion Eighttofasttocatch (5th) and In the Juice (6th).

“I was happy with his performance,” said jockey Petro. “Real early we got stuck on the inside and I wasn’t happy with my spot. But we got closer and closer and everything worked out. We figured there would be a few horses outside of us with speed so we went in thinking, ‘sit’. We did and it worked out great when it was time to go. He was good. Real good.”

Not Abroad finished second in the Classic two years ago and was third last year.

“We had been in this race the last several years,” said trainer Petro. “We felt coming in today that we had a very good chance to win. He has been doing very well lately and we looked forward to this race. We had a great race and at the 3/8th’s pole everything opened up for us. My brother ran a very good race.”

This was his second stakes win of the year for Not Abroad after capturing the Jim French Memorial at Delaware in May. Not Abroad is an eight time winner from thirty-two starts and a winner of over $600,000.

Julian Pimentel (jockey, Regal Warrior-2nd) said, “He broke good. No problems. He tried hard we just ran into a better horse, I guess. Just couldn’t keep up down the lane with the winner.”

Shannon Uske (jockey, Cactus Charlie- 4th) said, “We were in a nice spot. He just didn’t fire down the lane. We had the trip we wanted. He just didn’t have the kick like we thought he would.”

Sheldon Russell (jockey, Eighttofasttocatch-5th) said, “I was happy with the trip but disappointed when I asked him to pick it up at the half-mile pole. We were struggling and he never got comfortable today. It was not our day.”

Tim Keefe (trainer, (jockey, Eighttofasttocatch-5th) said, “I am disappointed, obviously. I thought I had everything going in the right direction with him and said earlier in the week if he gets beat it would be by a better horse. Unfortunately he got beat by four better horses. I thought he would run a great race today. This was uncharacteristic of him.”

Wesley Ho (jockey, In The Juice-6th) said, “He tried hard but he got tired at the end.”