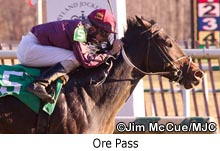 LAUREL, MD. 01-19-12---Harry & Tom Meyerhoff’s Ore Pass broke sharply, sat off the dueling leaders, then went on the attack and charged by to win this afternoon’s feature at Laurel Park, the $125,000 Frank Whiteley Jr. Stakes for 3-year olds.

Julian Pimentel was at the controls of the Mike Trombetta trainee, who completed the seven furlong distance in 1:24.78, a length and a half ahead of Alpha Mike Foxtrot, with Lunar Rock finishing a distant third.  Ore Pass paid $5.80 as the betting favorite.

“I was kind of glad Mike told me just to stay behind the two horses,” said Pimentel. “When it was time go, just do it. He was kind of getting bored out there by himself, he was waiting a little bit. That was more like him.”

The War Pass colt was an impressive debut winner at Laurel on November 24, then disappointed at Parx Racing as the 3-5 favorite in an allowance test earlier this month.

“I really don’t know what happened up there at Philly (Parx Racing). It was just a horrible experience,” Trombetta said. “We still don’t have a real good explanation for why he didn’t do so well a couple of weeks ago.”

Trombetta, who conditioned 2006 Preakness Stakes (G1) runner-up Sweetnorthernsaint, indicated Ore Pass could run next in the Miracle Wood Stakes at Laurel on February 9.

“This was a great step back in the right direction,” added Trombetta. “We had those Triple Crown thoughts after the first race like this one was going to be very good. It seems like the train is back on the tracks.”

Morning line favorite Heat Press and Hanky Doodle were scratched by trainer Graham Motion. Both will run in a $40,000 allowance race at one mile here Thursday afternoon. 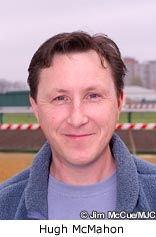 In the first 11 days of the winter meet, McMahon has 10 victories and 20 in the money finishes after 22 starts.

“That is an amazing stat,” said McMahon, who finished third in the 2012 Maryland trainer standings with 49 scores. “They all work, they all want to win but ultimately God decides who wins. When I was a jockey, Allen Jerkens came into the paddock and said it is all about picking up a check, which keeps the owners involved and pays the bill. I try to put the horses in spots where they can be competitive.”

McMahon has two horses entered on Monday’s nine-race card at Laurel, including Wolfcamp in the $125,000 Fire Plug Stakes.