Pino On The Brink Of History, Three Victories Shy Of 10th On The All-Time Win List

Pino On The Brink Of History, Three Victories Shy Of 10th On The All-Time Win List 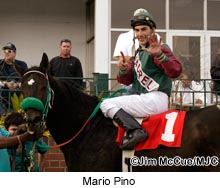 LAUREL, MD. 09-07-12---On his 41st birthday, Mario Pino rode his 5,000th career winner. On the eve of his 51st birthday, Pino is just three victories shy of tying Earlie Fires for 10th on the all-time North American win list. The Ellicott City resident, who has visited the winners’ circle 6,467 times, has four mounts Friday evening at Presque Isle Downs in Erie, PA. and is named on eight horses Saturday.

“It would be really ironic if I could reach this milestone on the birthday,” Pino said earlier this afternoon from Erie. “I have been given an opportunity up here and have been taking advantage of it.”

Pino ranks second in the Presque Isle standings with three weeks remaining in the meet, which started in mid-May. He passed Sandy Hawley for 11th on the all-time list last month and has won 11 races in four days this month to close in on Fires, who retired with 6,470 career winners.

“I have been riding with a ton of confidence for more than a month,” added Pino. “I was fortunate enough to win on some good horses and now am in a zone. It seems like all my decisions have been right lately.  I am going to finish the meet up here then take some time off and talk to my family to see what is next. There is no reason to stop riding. I feel fine mentally and am riding really well.” 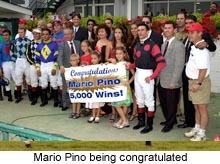 Pino holds the record for most victories on the Maryland circuit, according to Equibase, riding 4,958 winners at Laurel Park (2,749), Pimlico Race Course (1,787), Bowie Race Track (404), Timonium (13) and Marlboro (5). Though he rode in the shadows of such riders as Kent Desormeaux, Edgar Prado and Ramon Dominguez, Pino did rank in the top five of the state standings for 25 straight years (1979-2003).

“Being consistent is one of the hardest things to do in this business,” Pino said. “Some riders have a few big years and start to take it for granted then quickly decline. I have been fortunate to be reliable for all these years and now I am on the brink of history. It takes hard work and the ability to stay healthy. To be able to last this long and steadily knock off the wins little by little is more difficult than it seems.”

Winning has not been tough for a jockey who rode his first winner, Ed’s Desire, at Bowie on January 16, 1979 when he was 17 years old. It has led to eleven 200-win seasons and at least 150 victories 28 times. Five years ago he became one of the principle players in the Triple Crown as the rider for Hard Spun with an exciting second place finish in the Kentucky Derby and a respectable third in the Preakness Stakes. The duo completed a fantastic campaign with a game second place finish in the Breeders’ Cup Classic.

“As I get closer to this mark, I am thinking back to so many things throughout the years,” Pino said. “I can remember everything that happened in that race where I won my first race. It doesn’t seem like it was 33 years ago. Then I look back at the Derby where we were on the lead turning for home. It gets me a little choked up.”

“I look at those names and to be in this select company is surreal,” said Pino, whose horses have earned more than $118.5 million, 34th in the all-time standings. “These are the best jocks to ever ride and are true Hall of Famers. To be in the sentence is a dream come true. Maybe one day I’ll be considered.”

Pino will be inducted into the Maryland State Athletic Hall of Fame on Thursday, Nov. 8. The 2012 class will include Johnny Unitas, golf legend Carole Mann and former NBA player Danny Ferry. The Maryland Jockey Club will honor Pino at Laurel Park on Saturday, Nov. 10.

“I will always consider Maryland to be my home,” Pino said. “I grew up in the state and raised my family there. It is the place where I won nearly 5,000 races. It is a special feeling to be honored along with Johnny Unitas and then two days later get more attention, this time at a place where I went to work for more than 30 years.”

•    became the 15th jockey in North America to win 6,000 races when he rode Pass Play, a horse trained by his brother Mike, to victory at Laurel Park on November 7, 2007

•    runner-up for the 1979 Eclipse Award for Outstanding Apprentice Jockey

•    finalist for the George Woolf Memorial Jockey Award given to the jockey whose career and personal character reflect positively on the sport in 2003, 2007 and 2008