LAUREL, MD. 01-04-12---What a day it was for Rapid Redux’s owner Robert Cole! This morning it was announced Rapid Redux had earned a Special Eclipse Award and a trip to Beverly Hills for the Baltimore County native later this month. A couple hours later baseball Hall of Famer Brooks Robinson wished him well as his star runner looked to continue his winning ways. Then Rapid Redux did his part, holding off Awesome Rhythm in the sixth race at Laurel Park for his 22nd consecutive victory.

“Being a local it is fun winning in front of the home crowd,” said Cole, a 1981 graduate of Loch Raven High School. “A lot of my friends are here. I was a bettor for years before I was an owner. I know the people here and it is fun to win with my friends.”

Rapid Redux led from start to finish, beating four other starter allowance runners by three-quarters of a length on opening day of the 2012 racing season. J.D. Acosta was aboard the newly minted six-year-old, who completed the one-mile distance in 1:38.24.

Awesome Rhythm was second at the start and pressed the winner throughout, getting as close as a half-length nearing the top of the stretch, but Acosta applied the whip and Rapid Redux emerged the clear winner. He paid $2.80 as the 2-5 betting favorite.

“He was getting out a little bit down the lane with me,” said Acosta. “I was really concerned because I had that other horse right next to me the whole time. I knew he was the horse to watch. When we turned for home he really started running the way he always does. He picked up the bridle and he started running really strong. “

Trainer David Wells revealed Tuesday afternoon that Rapid Redux “grabbed a quarter” in his right front foot a few days ago during training and had a minor cut on his right foot.

“I was at a really bad angle and from my angle he got beat,” said Wells. “It was 30 percent to run yesterday. We jog him this morning for the vet and put the hoof testers on and he thought we were going to be okay.”

“He has been placed really well,” added Wells. “Condition books win races and that is what it is. He is not a stakes horse. He is not an allowance horse. People want us to try it but he is not that quality.”

Rapid Redux has won races at seven different tracks at distances from five-furlongs to 1-1/8 miles, using seven riders during the streak. He earned his 19th straight victory at Laurel Park on October 27, 2011 to tie Zenyatta and Peppers Pride in the record book and won four other races here last year (January 12, February 16, March 3 and December 13).

“The math is unbelievable when you think about it,” added Cole. “It is tough to win this many in a row. The durability is his greatest trait. He’ll keep running as long as he’s healthy.”

The race and post race interviews are available at: https://www.youtube.com/watch?v=cr_ewEEOS54 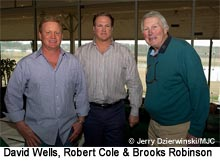 Earlier Wednesday, the National Thoroughbred Racing Association (NTRA), Daily Racing Form and the National Turf Writers and Broadcasters announced that Rapid Redux will be honored with the Special Eclipse Award. The Special Award honors extraordinary service, individual achievements in, or contributions to the sport of Thoroughbred racing. Cole will accept the Special Award on Monday, January 16 at the 41st Annual Eclipse Awards held at the Beverly Wilshire in Beverly Hills, Calif.

“It’s been a great privilege and I’m very happy about it,” Cole said.  “It’s been fun the last couple of months. I’m glad we’re here and hope it doesn’t end.”

The connections will find out Thursday afternoon if Rapid Redux earned “Vox Populi Award,” honors. The brainchild of Secretariat’s owner, Penny Chenery, Rapid Redux is one of four finalists, along with Goldikova, Havre de Grace, and Uncle Mo.

Cole is no stranger to a successful claim. In 2003, he claimed Shake You Down from the Laurel barn of Luigi Gino and watched the horse blossom into one of the best sprinters in the country under the tutelage of trainer Scott Lake, winning three graded races and finishing in the money in a pair of Grade 1’s (second in Breeders’ Cup Sprint and third in De Francis Dash).

Cole topped the Maryland standings four consecutive years (2006-2009), led the nation in victories in 2008 with a career-best 234 and has ranked among the nation’s leaders in wins and earnings seven times since 2001.

Save the date - we're ending the Summer Meet with a bang. Celebrate the end...