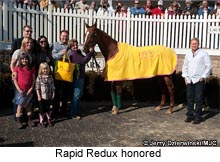 LAUREL, MD. 02-18-12---Rapid Redux, the winner of 22 consecutive races, was honored at Laurel Park Saturday afternoon with a winners’ circle presentation. Six of the victories during the streak occurred at Laurel, more than any other track.

The son of Pleasantly Perfect, who had a perfect 19-for-19 season in 2011 and took home a pair of national awards, received a  speciallydesigned blanket and a tote bag full of goodies, while owner Robert Cole and trainer David Wells were given trophies.

“I can’t believe the size of the crowd in the parking lot,” said Wells, who brought his star down to central Maryland for the ceremony from his Pennsylvania farm. “I haven’t seen this many people at Laurel in a long time.”

Cole, a Baltimore County native, claimed the gelding at Penn National for $6,250 on October 13, 2010 and placed him into the capable hands of Wells. In his next 24 races, Rapid Redux won 23 times with earnings of $266,074. The win-streak began December 2, 2010 at Penn National. During the streak, Rapid Redux won races at seven different tracks at distances from five-furlongs to 1-1/8 miles, using seven riders.

“I have had a few moments at home where I sat there and said ‘wow, how in the world did this ever happen’. Every time I think about it just becomes more unbelievable,” Cole said. “It’s been a lot of fun. The fans have been great and we’re really glad we won a lot of races here in Maryland toward the end.”

Rapid Redux earned his 19th straight victory at Laurel Park on October 27, 2011 to tie Zenyatta and Peppers Pride in the record book for most consecutive victories by a United States based runner.

“It is amazing that he stayed sound this long,” added Wells. “That has been the key. Most horses win three or four races then start developing problems. That didn’t happen with him.”

The NTRA, Daily Racing Form and the National Turf Writers and Broadcasters honored Rapid Redux with the Special Eclipse Award for extraordinary service, individual achievements in, or contributions to the sport of Thoroughbred racing.

He finished 11th in the voting for Horse of the Year honors with 52 points, which included four first place votes, despite running in starter allowance company in 17 of the 19 starts in 2011.

“David has done a great job,” added Cole. “The horse has gone out on the playing field and performed flawlessly. He didn’t have any bad games and that is his greatest trait-his durability and consistency. That is what made him unforgettable and a record breaker.” 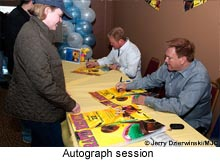 Rapid Redux is currently out of training but could make a return this spring.

“We are letting him be quiet for awhile,” said Cole. “His last race or two his final times were off a little. We thought it was best to let him get some rest and see how he comes back.”

The celebration also included a poster giveaway and an autograph session with Cole, Wells and primary jockey J.D. Acosta.