Rapid Redux Ties A Modern U.S. Record With 19th Victory Of The Year

Rapid Redux Ties A Modern U.S. Record With 19th Victory Of The Year

LAUREL, MD. 12-13-11---Rapid Redux won for the 19th time in as many starts this year, winning today’s sixth race at Laurel Park, after he out stepped five starter allowance runners. The victory, the 21st straight for the 5-year-old, ties the modern-day United States record for victories in a calendar year, which was previously shared by Triple Crown winner Citation (1948) and Hall of Famer Roseben (1905).

“I love the horse,” owner Robert Cole said. “The trainer has done an incredible job. I feel very blessed.  It’s an incredible feat of luck and incredible skill by the horse. My dad talked about Citation all the time and it’s amazing here we are at 19 with Citation. There is no way you could ever imagine claiming a horse for $6,000 that would be mentioned in the same breath as Citation. It is more than a million to one. I know that and do not take it for granted.”

Rapid Redux, with jockey J.D. Acosta, was a little reluctant to load into the starting gate for the 1-1/16th mile test but was first away at the start and wouldn’t let a horse get close enough to threaten until the very end of the race as he completed the distance in 1:45.08 and won by a half-length over Awesome Rhythm, with No Brakes finishing third.

“I have to give all the credit to J.D. Acosta,” said trainer David Wells. “He just took it easy down the backstretch and he had plenty of horse left down the lane.”

Cole, a Baltimore County native, claimed the son of Pleasantly Perfect at Penn National for $6,250 on October 13, 2010. The win-streak began December 2, 2010 at Penn National. Since then, the gelding has won 22 of 23 races with earnings of $256,384. Cole and Wells have sent their star to seven different tracks at seven distances from five-furlongs to 1-1/8 miles.

Acosta is one of seven jockeys to ride Rapid Redux during the streak. It was his seventh victory and the 30-year-old is proud to be part of history.

“He is an athlete. He is like Michael Phelps,” Acosta said. “This horse is trained to run. As soon as we turned for home he just started running so hard. But he is slowing down some and might need a little break.” 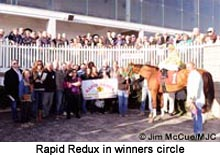 Rapid Redux earned his 19th straight victory at Laurel Park on October 27 to tie Zenyatta and Peppers Pride in the record book and has won three other races here (January 12, February 16 & March 3) during the streak.

“I would love to squeeze one more out before the end of the year but it is up to the horse,” added Wells. “It is amazing he has stayed sound so long. He trains well every day. He is always at 80 plus percent. A lot of days he is at 100. The reason we kept him sound is we picked our spots really well-keeping him in the $5,000 starters. You run him in an allowance race or a stakes he is tore up. We have turned down $35,000 a couple of times but he is not going to win for more than that. Why not let him go out on top? That’s what I want to do.”

“David has been saying that for two months,” joked Cole. “We really want to quit when he is on top. It is difficult to race 30 races consecutively. He was doing that 10 races before he started winning. It is tough to get it just right. You want to win as many as you can but you also don’t want to blow one at the end. We would like to end on a good note and not see him get beat.”

Cole is no stranger to a successful claim. In 2003, he claimed Shake You Down from the Laurel barn of Luigi Gino and watched the horse blossom into one of the best sprinters in the country under the tutelage of trainer Scott Lake, winning three graded races and finishing in the money in a pair of Grade 1’s (second in Breeders’ Cup Sprint and third in De Francis Dash).

The 1981 graduate of Loch Raven High School topped the Maryland standings four consecutive years (2006-2009), led the nation in victories in 2008 with a career-best 234 and has ranked among the nation’s leaders in wins and earnings seven times since 2001.