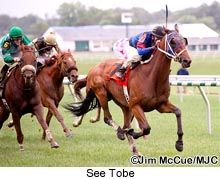 LAUREL, MD. 09-08-12---Non Stop Stable’s See Tobe was the leader of the pack as he chased three speedsters up front, then came flying down the lane to win the $125,000 Japan Racing Association Stakes, today’s feature contested over the good turf at Laurel Park.

Sent to the post at odds of 7-1 under jockey Julian Pimentel, the son of Concerto beat longshot Mr. Irons by a length and a quarter, while Dannhauser nipped London Lane to finish third. See Tobe completed the 1-1/16th mile distance in 1:44.53.

Gary Capuano trains See Tobe, who was winning his first stakes after finishing second in his previous start, the East Hanover Stakes at Penn National on July 28.

“He was a little closer than he usually is but he made a big run,” said Pimentel. “We thought that with it being a little softer it would be more helpful for us. He ran great. Around the quarter pole I thought I had them.”

See Tobe is now 3-for-8 this year, with just one off the board finish.

“We ran into some problems with him early and gave him plenty of time and did some surgery on him,” said Capuano. “He came back really good. He’s just been getting better. He’s a one run horse. He just keeps coming right at the end. You can’t give up on him. In the last forty yards he gives you an extra gear.”

The first mile of the race featured a three-way duel between defending champion Eighttofasttocatch, betting favorite Action Andy and El Commodore. The trio turned for home well clear of the field but could not withstand the onslaught from the closers.

Eighttofasttocatch finished fifth, less than a ½ length out of the money, while Action Andy and El Commodore faded to seventh and eighth respectively in the nine-horse field.

Eighttofasttocatch trainer Tim Keefe was using the Japan Racing Association as prep for the Maryland Million Classic, a race he won a year ago. The 6-year-old had not run since finishing last in the Pimlico Special (G3) on Preakness weekend.

“I was very happy with the effort,” Keefe said. “I thought Action Andy was the horse to beat and we were in a good spot. The rain probably helped the closers but he’ll get a lot out of this race, much more than I could get out of him in the morning, and it will set him up great for Maryland Million.”

The Not For Love gelding had not been on the grass since a seventh place finish in the Dixie Stakes (G2) on Preakness day 2011.

Regal Solo, who has two Maryland Million victories in his career, prepped for next month’s event with a victory in today’s 9th race. The 7-year-old and jockey Sheldon Russell came up the rail to run down Tomorrow’s Tale and Trapezium Star just before the wire in a $45,000 allowance test.

“He ran well,” trainer Damon Dilodovico said. “We were considering just going straight to the Maryland Million off his last start (an off the board finish at Delaware Park on August 22) but this race filled and now we have options. We could run in the Sprint or the Classic.”

Regal Solo is now 8-of-30 lifetime with earnings of $421,248. Seven of his victories have occurred at Laurel.

The 6-furlong turf record was set on opening day in the Jameela Stakes when Jazzy Idea posted a timing of 1:07.45, which broke the 5-year-old mark set by Chasin Tiger. 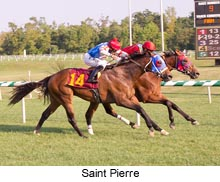 Two records went down Friday in a one-hour period. In the 7th race, Southern Region established a new mark at 5-furlongs, stopping the clock in 1:00.75, .4 faster than Tune of the Spirit ran in 2007. Two races later 53-1 shot Saint Pierre put his name in the record book, smashing the 1 mile turf record by more than a second, nipping Schoolyard Dreams by a head. The son of Speightstown finished in 1:33.30. Art Fan held the previous mark for nearly seven years (1:34.69 on Nov. 3, 2005).