LAUREL, MD. 02-16-12---The Laurel Park racing office was able to attract one of the top contenders from the 2011 Triple Crown trail for Monday’s $200,000 General George Handicap (G2). The General George is race nine of 10 on the holiday card with a post time of approximately 4:40 p.m. Eastern.

Toby’s Corner was considered one of the favorites for last year’s Kentucky Derby (G1) after upsetting Uncle Mo in the Wood Memorial (G1) but trainer Graham Motion had to scratch the son of Bellamy Road the week of the Derby after the colt injured his left hind leg in training.

Toby’s Corner will make his first start since the Wood against six top sprinters in the 7-furlong General George. The 4-year-old returned to training in October and has put in eight recorded works, including a 5-furlong work at Palm Meadows Training Center in south Florida Tuesday before returning to the Fair Hill Training Center in Cecil County, Md.

Eddie Castro will ride Toby’s Corner, who broke his maiden at Laurel Park as a 2-year-old and won an allowance race during the 2011 Laurel winter meeting.

“I am very excited but also a little apprehensive because this is a tough spot for his return,” Motion said. “He is the high weight (carrying 121 pounds-four to six pounds more than the other top contenders) but at the same time he has run well at Laurel and I love the distance. There are pros and cons to coming back in the General George but the pros outweigh the cons.”

The General George will be the tenthgraded race for Caixa Eletronica (5-2 morning line favorite). The son of Arromanches has six third place finishes and a victory in the G3 Westchester Stakes last spring on his resume. The Todd Pletcher trainee has run twice already during his 7-year-old campaign with a victory in the Rise Jim Stakes in January and a third place finish in the Toboggan Stakes (G3) two weeks ago. Cornelio Velasquez has the call.

“He’s so consistent and tries as hard as any horse we have ever had,” said Pletcher, who also has the morning line favorite in the Campbell in Heart Butte. 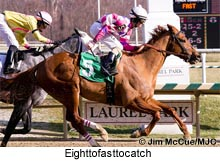 Laurel loving Eighttofasttocatch (7-2) won five races at Laurel Park in 2011, including four stakes races, with an average Beyer Speed figure exceeding 100. The son of Not For Love has not run since capturing the Jennings Handicap here in early December. Sheldon Russell rides for trainer Tim Keefe.

“He always runs well fresh. We were planning on running in the Evening Attire in New York (Jan. 21) but they had to cancel because of snow. Aqueduct brought the race back a week later but I thought it was a little too close to this race,” said Keefe, who will saddle Red’s Round Table in Saturday’s Barbara Fritchie. “I think there is enough speed in here where he will not have to be on the lead. He is versatile. He has won on the lead and coming from behind. We are definitely stepping him up in company, opting for this spot instead of the Campbell, but he has run well in graded company. He deserves a chance.”

Rick Dutrow, who won the 2004 General George with Well Fancied, will send two runners to Laurel Park. Yawanna Twist (4-1) and This Ones For Phil (8-1).

Yawanna Twist will make his 5-year-old debut Monday. The son of Yonaguska has finished on the board in eight of 10 starts, including a third place finish in the Carter Handicap (G1) last year. Former Maryland riding star Mike Luzzi comes down from New York to ride.

This Ones For Phil has five stakes wins on his resume, including the Swale Stakes (G2) three years ago. The son of Untuttable is entered in an allowance race at Aqueduct Friday but is expected to wheel back and compete in the General George on two days rest. Two-time Eclipse Award winning jockey Ramon Dominguez will be aboard the 6-year-old.

Fordangshore (10-1), who has won three of four, will make his stakes debut for trainer Mike Trombetta.  Trombetta said the 5-year-old son of Forest Danger earned this opportunity with an allowance score here on January 11. Julian Pimentel will be aboard the gelding.

“He ran a lifetime best number at this distance at this track and the timing is right,” Trombetta said. “He is a fast horse. He broke his maiden in New York and was second by a nose at Keeneland in his next start despite a bad break. He is a nice horse and I have always had him pegged as one. He wasn’t at his best last summer at Saratoga but he is on track.”

Trombetta will also saddle Jimanator, the 3-1 second choice in the Campbell. The son of Broken Vow finished third in both the Evening Attire (January 28 at Aqueduct) and Auld Lang Syne (December 31 at Parx Racing) after a score in the G3 Fred Hopper Stakes (November 26 at Calder).

“He is for real,” added the Baltimore born conditioner. “He beat a very good horse in Mambo Meister at Calder, had a troubled trip in Philly and was giving weight to I Want Revenge in New York. The weights are more back in line and I am looking forward to a big effort from him.”

My Cuz C J (20-1) finished a solid fourth behind Ben’s Cat in the Laurel Dash Stakes last October for trainer Kenny Cox. The son of Orientate won a three-way photo here on January 13 in his 5-year-old debut. Erick Rodriguez picks up the mount.

Saturday’s $200,000 Barbara Fritchie Handicap was reduced to eight fillies and mares after longshot Terra Rolla was scratched off the overnight Thursday morning.

Erick Rodriguez picks up the mount on 6-1 shot Aquitania, who won four races at Laurel during the 2011 fall meeting. Julian Pimentel had a double call on Aquitania and Lovely Lil.