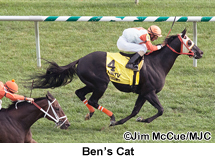 LAUREL, MD. 10-25-12---While the $350,000 Frank J. De Francis Memorial Dash headlines Saturday’s 11-race Fall Festival of Racing card at Laurel Park, the star of the program is the remarkable Ben’s Cat, who is looking to defend his title in the $150,000 Laurel Dash, one of five turf stakes on the undercard.

Maryland Jockey Club handicapper Frank Carulli has established the King Leatherbury homebred as the even money favorite in the 6-furlong turf test. Three weeks ago, he became the fourth horse to win the same Maryland Million race three consecutive years with a victory in the Turf Sprint. The son of Parker’s Storm Cat became Leatherbury’s first millionaire with a victory in the Turf Monster Handicap (G3) at Parx Racing in early September. He has won 18-of-27 starts with 13 stakes scores for earnings of $1,216,090.

“I’m very fortunate to have this horse, especially at this time of my existence,” said Leatherbury, who ranks third on the all-time win list with 6,351 career victories. “This is a dream here and I’m just riding it the best I can, thinking I’ll never have anything close to him anymore. He just wins.”

Now six, Ben’s Cat had to recover from a broken pelvis before he made his maiden debut at age four in 2010, then began his career with eight consecutive victories. He is a perfect 5-for-5 on the Laurel Park turf.

“Everybody knows the story of this horse,” added Leatherbury, who also owns and bred his star. “I’ve got the overwhelming favorite but he still has to win which he usually does. I should have no excuses.”

Julian Pimentel has the riding assignment.

Eight challengers are willing to face the favorite, including millionaire Heros Reward, the 9-2 second choice. The 10-year-old, who has career earnings of $1,272,898, finished three-quarters of a length behind Ben’s Cat on Maryland Million day. Ramon Dominguez picks up the mount on the Dale Capuano trainee.

“My horse is very consistent and I’m excited to be on him,” said Dominguez, who was a regular rider in Maryland from 2000-2003. “I’ve been in races against Ben’s Cat and followed his career to some extent. He has done great for King but I’m hoping we can beat him.”

An intriguing runner is 3-year-old filly Jazzy Idea (6-1), who has already won a pair of stakes races during the Laurel fall meet. The daughter of Great Notion broke the 6-furlong turf record in the Jameela Stakes (Sept. 5) then wheeled back to win the Maryland Million Oaks on the main track.

In 2007, Maryland native Kevin Plank of Under Armour fame bought historic Sagamore Farm with hopes of restoring the Baltimore County breeding and racing operation to prominence. On Saturday, Sagamore will be represented by three stakes runners.

“It is important to us to participate in days like this,” Sagamore trainer Ignacio Correas said. “Kevin wants to pump up Maryland racing and the conditions in the state are better now than when we started. For a new operation like us to have three horses is very promising.”

Hamp is the 4-1 second choice in the $150,000 Laurel Futurity for 2-year-olds. Bred at Sagamore, the son of Sky Mesa has two wins and a third in four career starts.

“We are high on him,” Correas said. “He’s more of a stalker than a closer. The race has a lot of speed but I don’t know how close he is going to be to the pace. He’s doing great and this will be a good test.”

Circleofinfluence, who broke her maiden earlier this month at Laurel, is a 20-1 shot in the $150,000 Selima Stakes for 2-year-old fillies. Discreet Marq (5-2) and Heading to Toga (3-1) figure to vie for favoritism. 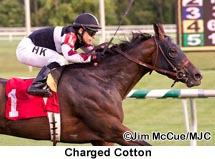 Charged Cotton is listed at 20-1 on the morning line in the $150,000 Lady Baltimore Stakes, a field where 11 of the 14 runners are stakes winners. Charged Cotton has won 3-of-4 this year, including a score in the All Brandy Stakes here on Sept. 15.

“She’s a very good filly who seems to be getting better every race but this is a big step up,” added Correas. “She’s sitting on a good race. We hope she has that kind of quality. It’s a good test for the filly to see if she can go forward.”